FMC’s new fungicide Onsuva to be launched in Paraguay

FMC is preparing for a historic launch, the start of the commercialization of Onsuva, a new fungicide used for preventing and controlling diseases in soybean crops. It is an innovative product, the first in the FMC portfolio made from the exclusive molecule, Fluindapyr, the company's first intellectual property carboxamide, which is part of a series of technological solutions in the fungicide pipeline.

“The product will be formulated in Argentina, but it will be exported for commercialization in Paraguay, which is the first country where it obtained registration for use on soybeans, which will, subsequently, being its expansion to the entire region. 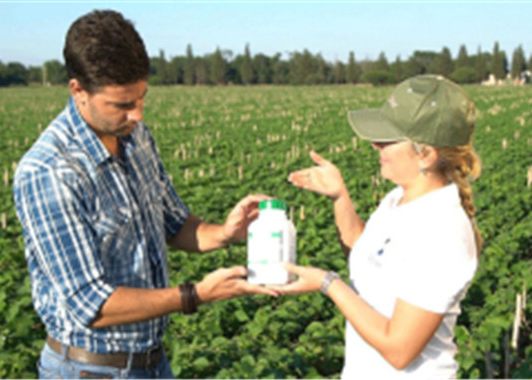 The Onsuva ™ launch event was held on 21st October in a variety of ways, including face-to-face in Paraguay and virtual for the rest of LATAM.

This technology opens up a great growth opportunity for the company in the fungicide market, increasing its portfolio with new solutions based on Fluindapyr, which will add value to the daily tasks of producers. In this way, FMC's business strategy will advance it one more step in its consolidation as an innovative, high-tech company offering excellent quality in the development of products for managing diseases in crops,” said Matías Retamal, Insecticides, Fungicides, Seed Dressing & Plant Health Product Manager at FMC Corporation.

"Producing it in Argentina is a sign that FMC is changing its strategy, bringing only active ingredients from abroad to formulate products locally, which will encourage development, create employment and achieve foreign exchange by substituting imports and promoting exports," he added.

FMC also recently announced the start of the local production of its flagship product, the insecticide, Coragen.

Onsuva is composed of two active ingredients, with the most important being Fluindapyr, a novel carboxamide (PROPERTY OF FMC) that is combined with Difenoconazole, therefore, creating an innovative broad spectrum fungicide for foliar disease control. Fluindapyr has a marked systemism and offers preventive, curative and eradicative action, achieving its fungicidal power by interfering with the mitochondrial respiration of fungal cells. For its part, the triazole that accompanies the mixture, its mode of action consisting of the inhibition of ergosterol biosynthesis, having a contact and systemic effect but with the same preventive, curative and eradication power are what makes ONSUVA a tool offering outstanding performance in the integrated control of pathogens.

It also has a considerable absorption capacity via foliar, marked translaminar and redistribution inside the plant, and, therefore, a higher rate of pathogen control can be achieved. In a matter of minutes, its synergy of advantages achieves high levels of control and quickly stops infections caused by the pathogens present during application, therefore, preventing further issues and new potential problems for crops,” Retamal added.

“It is a very valuable tool for soybean producers, since it generates a high level of control of soybean rust and the entire complex of end-of-cycle diseases that usually affect oilseed, such as frog's eye spot, brown spot or blight of the leaf. It is also remarkably persistent in ensuring crops are protected for a prolonged period of time,” Retamal further added, noting due to climatic factors, the pressure caused by pathogens is high in Paraguayan production, therefore, the arrival of Onsuva ™ is an important solution to face this problem.

According to Retamal, with a dose of between 250 and 300 cubic centimeters per hectare, in addition to a high level of control, a productive improvement in both quantity and quality can be achieved, and trials show increases in yields of between 10 and 12%.