Stemming the tide of invasive weeds with world-first herbicide capsules

An innovative herbicide delivery system could revolutionise the way agricultural and environmental managers battle invasive weeds.
The ingenious method uses herbicide-filled capsules drilled into the stems of invasive woody weeds and is safer, cleaner and as effective as herbicide sprays, which can have negative health impacts on workers and surrounding areas.

PhD candidate Amelia Limbongan from The University of Queensland’s School of Agriculture and Food Sciences said the method was highly effective against a wide variety of weed species, which pose a major threat to farming and grazing systems. 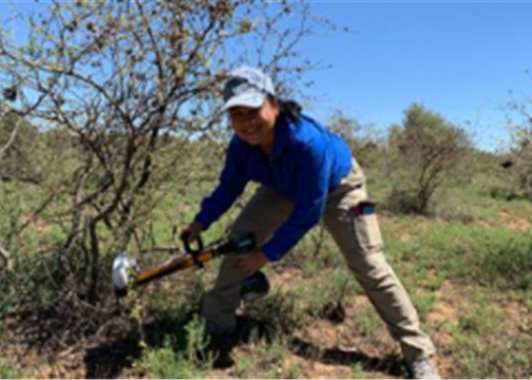 “This method of weed control is practical, portable and far more convenient than other methods and we’ve already seen several professional operators and councils adopting the approach.”

The portability and convenience of the system, coupled with its proven efficacy and safety, meant the encapsulated herbicide could be used in a variety of settings and locations worldwide.

“This method uses 30 per cent less herbicide to kill weeds, and is just as effective as more labour-intensive approaches, which will save valuable time and money for farmers and foresters,” Ms Limbongan said.

“It could also lead to better management of weeds in agricultural and environmental systems across the globe, while also protecting workers by practically eliminating their exposure to harmful herbicides.

“There is a great market for this technology in countries where invasive weeds are a problem and where forestry is an industry, which would be almost every country.”

Professor Victor Galea said the process used a mechanical applicator called the InJecta, that quickly drilled a hole in the stem of the woody weed, implanting a dissolvable capsule containing the dry herbicide and sealing the capsule into the stem with a wooden plug, bypassing the need to spray over large areas of land.

“The herbicide is then dissolved by plant sap and kills the weed from the inside and, due to the small amount of herbicide used in each capsule, causes no leakage,” Professor Galea said.

“Another reason why this delivery system is so useful is that it protects non-target plants, which are often damaged through accidental contact when using traditional methods such as spraying.”

Researchers are continuing to trial the capsule method on several different weed species and have a number of similar products in line for distribution, which will help farmers, foresters and environmental managers eliminate invasive weeds.

“One of the products tested in this research paper, Di-Bak G (glyphosate), is already being sold in Australia along with the applicator equipment and can be purchased through agricultural supplies outlets across the country,” Professor Galea said.

“Three more products are being prepared for registration and we plan to expand this range over time.”