CropRadar by Kleffmann Digital has measured the cultivated oilseed rape areas in the top 10 countries in Europe. In January 2022, rapeseed can be identified on more than 6 million ha in these countries. 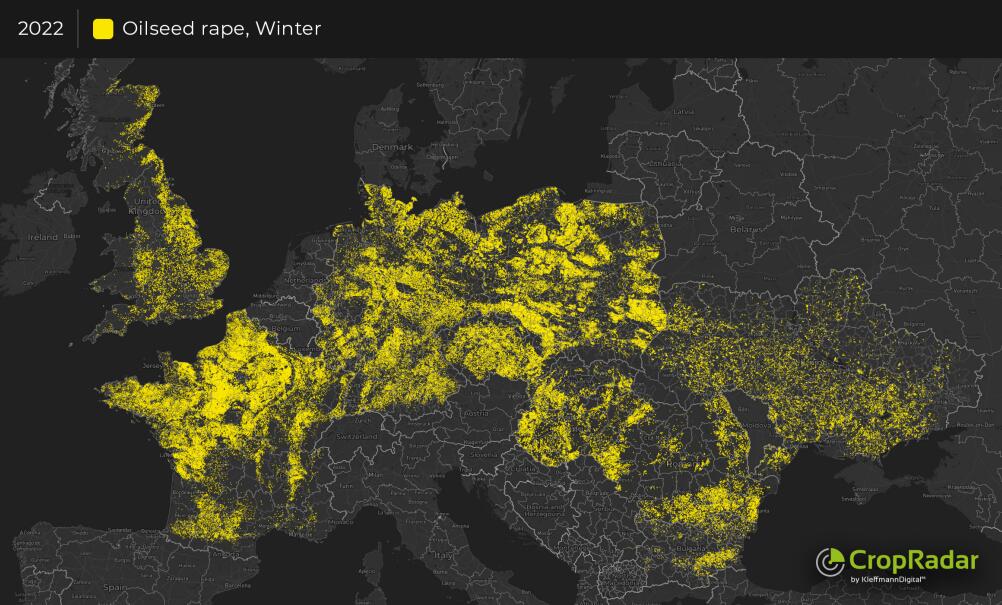 While there were only two countries, Ukraine and Poland, with a cultivation area of more than 1 million ha in the 2021 harvest year, there are four countries this year. After two difficult years, Germany and France each have a cultivated area of significantly more than 1 million ha. This season, by the end of February, three countries were almost equal in first place: France, Poland and the Ukraine (survey period until 20.02.2022). Germany follows in fourth place with a gap of about 50,000ha. France, the new number one, has recorded the largest increase in area with an uplift of 18%. For the second year in a row, Romania holds 5th place with a cultivated area of more than 500,000ha.

The reasons for the increase in oilseed rape acreage in Europe are, on the one hand, the rapeseed prices on the exchanges. For years these prices were around 400€/t, but have been rising steadily since January 2021, with a preliminary peak of more than 900€/t in March 2022. Furthermore, winter oilseed rape continues to be a crop with a very high contribution margin. The good sowing conditions in late summer/autumn 2021 enabled growers to get on and establish the crop.

Field size varies greatly depending on the country

With the help of satellite technology and AI, Kleffmann Digital is also able to determine how many fields the oilseed rape cultivation are distributed over in the ten countries. The number of fields reflects the diversity of agricultural structures: in total, more than 475,000 fields are cultivated with rapeseed this season. With an almost identical cultivated area in the top three countries, the number of fields and the average field sizes vary greatly. In France and Poland the number of fields is similar with 128,741 and 126,618 fields respectively. And the maximum average field size in a region is also the same in both countries, at 19ha. Looking at the Ukraine, the picture is different. Here, a similar area of oilseed rape is cultivated on “only” 23,396 fields.

How will the Ukrainian conflict impact on global oilseed rape markets

In harvest year 2021, Kleffmann Digital’s CropRadar assessments showed European oilseed rape production was dominated by Ukraine and Poland, with over a million hectares each. In 2022, they are joined by Germany and France with cultivated areas of more than 1 million hectares each. But of course, there is a difference between planted areas and production, especially with losses in planted area due to the more familiar factors of pest damage and over-winter frosts. Now we have one of the leading countries engaged in war, where conflict will inevitably impact on the priorities of production and ability to harvest any remaining crops. Whilst the conflict remains ongoing, the short, medium and longer-term outlooks are uncertain. With a displaced population, no doubt including farmers and all those who service the sector, the 2022 harvest may well be without the contribution of one of its leading markets. The average yield of winter oilseed rape last season in Ukraine was 28.6 dt/ha which amounts to a total tonnage of 3 million.  The average yield in EU27 was 32.2 dt/ha and total tonnage was 17,345 million.

In the current season the establishment of winter oilseed rape in Ukraine was supported by favourable weather conditions. Most hectares are in the southern regions like Odessa, Dnipropetrovsk and Kherson, in the region of coastal ports for export opportunities. A lot will depend on the conclusion of the conflict and the whatever remaining facilities to handle any harvested crops and the ability to export them from the country.  If we consider last year’s yield, providing a production volume equivalent to 17 percent of the European harvest, the war will definitely have an impact on the WOSR market, but the impact will not be as significant as some other crops such as sunflowers from the Country. As Ukraine and Russia are among the most important sunflower-growing countries, considerable distortions and area shortages are to be expected here.